Pricing & Surcharge Updates Spares, Exchange, and Maintenance Service Plan invoices may include a price increase and/or surcharge as a result of increases in global supply chain costs. Repair surcharges will be applied at checkout. Read more
https://aerospace.honeywell.com/us/en/search.html
× 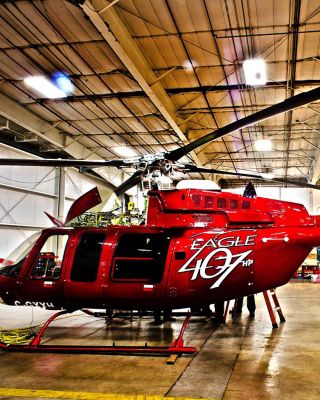 Under the partnership, Honeywell provides the HTS900 engine and configuration while Eagle Copters provides the airframe side of the conversion, including a specially designed Inlet Barrier Filter, the labor, flight test, and certification at one of their three global locations.

Upgrading your engine isn’t a quick decision, but it will be rewarding - improved engine performance, increased reliability and expanded high/hot capability.

The reasons to upgrade to an Eagle 407HP

The Bell 407 is already one of the best and most versatile helicopters ever made.  The Eagle 407HP upgrade gives you a faster and more powerful, yet surprisingly, more fuel-efficient aircraft.

2. More Power To You. MORE PAYLOAD TOO.

The Eagle Copters conversion improves the payload capability of your Bell 407 helicopter by an estimated 19% at 10,000 feet, significantly increasing the aircraft’s capability over a wider operating spectrum. The powerful new Honeywell HTS900 engine delivers an output of 1,021 shaft horsepower — a 22% improvement in output at high and hot conditions over the incumbent engine.

The next-generation technologies at work in the Honeywell engine combine to deliver more power while occupying less cubic space and burning up to 17% less fuel. The lower fuel consumption of course, increases both operational savings and simultaneously increases the endurance.

4. Ready For Action. THE ALL-SECTOR SUPERHERO.

Developed with safety, performance and affordability as top requirements, the Eagle 407HP is ideally suited for playing an even more demanding role wherever out performance is a must: in firefighting and forest management, security and law enforcement, utility services such as pipeline and power line construction, heli-sports, Emergency Medical Services (EMS) and more.

What better time than now to upgrade to the 407HP!

To request further information or to find your local Honeywell dealer please complete the form.