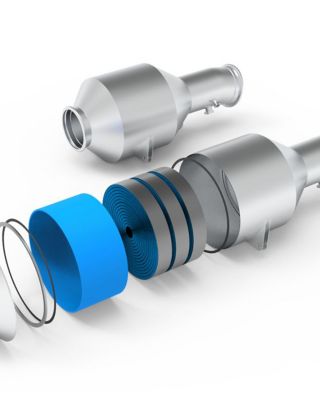 This fourth-generation catalyst removes 80 to 90% of the volatile organic compounds (VOCs) and oil particulates that cause most unpleasant cabin odors.

Cabin odors caused by jet fuel, oil, deicing agents and engine exhaust can be unpleasant for passengers and expensive for airlines.

CHOC4 Addresses the Root Cause of Cabin Odors

VOCs and oil particulates cause unpleasant cabin odors when they contact hot surfaces on the aircraft. CHOC4 technology neutralizes odors by converting VOCs and oil to harmless byproducts.

Depending on temperature, CHOC4 removes as much as 80 to 90% of the VOCs found in the bleed air introduced to the aircraft cabin during flight and about 50% of VOCs when the aircraft is on the ground. Conventional ozone converters don’t address the problem of cabin odors, and most other dual-function converters remove less than 30% of odors.

The CHOC4 is an upgrade to current ozone converters flying on Airbus A320 and Airbus A330 340 aircraft. Honeywell can economically replace the existing core with a new offset-fin matrix infused with Honeywell’s proprietary catalyst. The re-coring process improves the converter’s odor-removing effectiveness almost threefold and extends its service life considerably.

If you want to learn more, fill out the form below and a Honeywell Representative will get in touch.