Notification: It is important to remember that payment remittance is a requirement to complete the application and offset any invoices. The payment remittance should be sent to MSPCashApplicationRequests@Honeywell.com within 24 hours of when payment is sent to us.
Scheduled Maintenance We will be conducting scheduled maintenance on Dec 9th from 07:00 PM EST to Dec 10th at 04:00 AM EST. During this time MyAerospace applications will be temporarily unavailable. We apologize for any inconvenience this may cause.
/content/aerobt/us/en/search.html
× 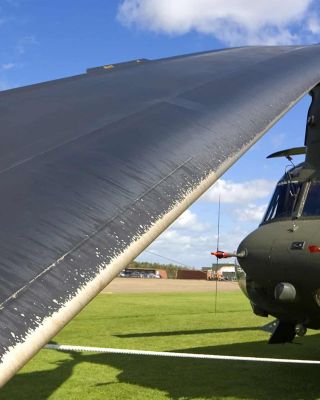 True stories from a former US Army helicopter pilot

Weaving through the Afghan mountains in a 50,000-pound rotorcraft, traveling 150 mph is not for the faint of heart. Luckily for the US Army, it is for Lieutenant Colonel Roger Neilsen Capps. Meet retired US Army pilot, Roger Capps, who for more than 15 years has piloted one of the US military's bell cows – the CH-47 Chinook. Roger has served in multiple overseas deployments from Afghanistan to Morocco to Iraq.

Hear stories about his experiences flying for the US Army, Columbia Helicopters, and the Nevada National Guard. Learn what it’s like to fly this battle-tested aircraft and get a glimpse of what the future may have in store for this flagship helicopter.

Roger will be joined by Honeywell’s T.J. Pope – Senior Director, Military Turboshaft Engines at Honeywell / Aviation Lieutenant Colonel, US Army Reserves. TJ will share what’s new and what’s next for the continuously improving T55 engine that powers the CH-47. TJ will also talk about current and future Army requirements.

Your questions about piloting the CH-47 Chinook are here. This is a podcast you will want to wear your seatbelt for and won’t want to miss!

Honeywell Aerospace Engines & Power Systems business unit is looking for talented Engineers passionate about the design, development, validation and certification of advanced turbomachinery products for commercial and defense applications. We are hiring across all Engineering departments and experience levels. Check out the link below to become a #futureshaper. #aerospace #hiring