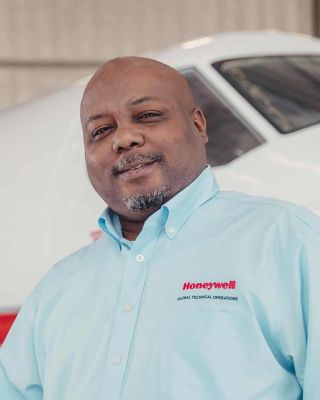 Mitch caught the aviation bug at an early age trying to name the aircraft taxiing in to Kansas City International Airport, where his father worked as a TWA ramp supervisor for over 30 years. Then the movie Top Gun came out when he was a teen, and as he puts it, “it was over!”

He loves his job because it allows him to help people. Mitch particularly likes seeing joy and relief return to the face of a technician or DOM when he can resolve an issue that has been a major source of frustration.

His U.S. Navy Search and Rescue motto, “So Others May Live,” guides his customer support efforts for the people who put their faith in Honeywell whenever they fire up their engines and point the nose of their aircraft skyward.

Mitch is certified for avionics and wire connector repairs and in flight line maintenance, and is a Six Sigma Green Belt. His product expertize includes air transport, business and general aviation and helicopter flight controls.

He has received several military and business awards and qualified as a plane captain, search and rescue swimmer and M60D Door Gun in the U.S. Navy.

His hobbies include spending time with his family, hiking and tinkering.